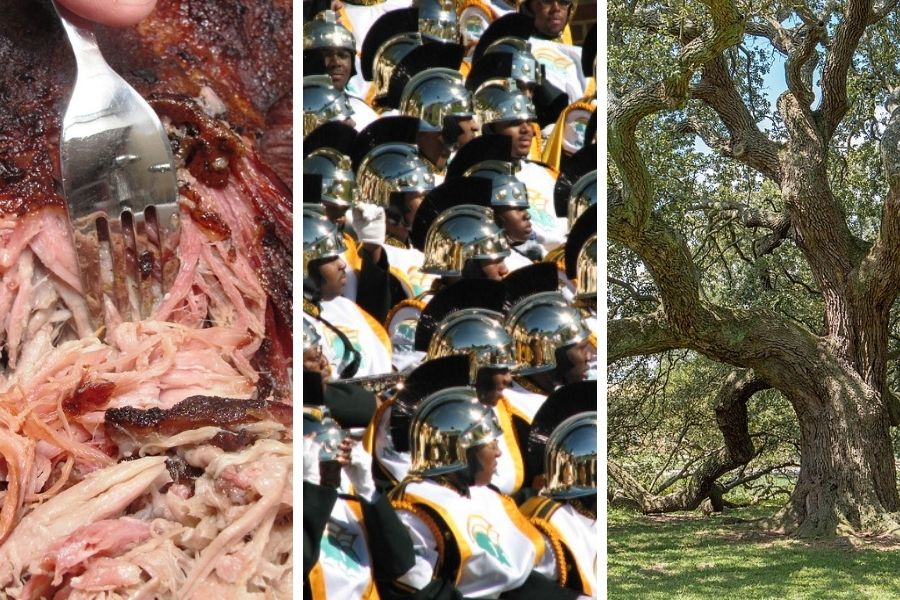 I grew up country. That’s right, I grew up saying “yes ma’am” and “no, ma’am.” I appreciate the value in knowing how to formally set a table, I have seen Gone with the Wind and Eve’s Bayou more times than I care to admit and seeing horses, cows and chickens in the middle of a “city” doesn’t shock me one bit. I was shuffled into the myriad of southern traditions as a young girl, unbeknownst to just how “southern” I actually was. I caught fireflies and drank lemonade mixed with iced tea (an Arnold Palmer, for those that didn’t know). I let the “g” slyly slip from common words in my vocabulary like “goin’” and “fixin’.” I spent countless summer days at the beach collecting seashells and splashing around in the water. I wore my hair fashioned into afro puffs (the Black girl version of pigtails,) and I ate more than my fair share of pulled pork sandwiches from mom and pop drive-in restaurants.

But, in Southeastern Virginia, I also got to revel in the fact that we were a coastal town that had an influx of culture due to the area being a military community. I had friends from all over the country and from many different backgrounds growing up. We also have lots of history in this area ranging from countless Native American tribes inhabiting the area to the first Africans in America being brought to our shores in 1619. I’d like to think that I was rather “cultured” due to my upbringing. But, I am still a distinctly southern girl!

Southeastern Virginia has always been home for me. I’m from Hampton Roads, a major metro in the southern part of the state, very close to North Carolina that comprises seven cities. I was born and raised in the City of Hampton. Hampton is a well-known, small town that boasts of its beach (not too impressive, but it was a major travel destination during segregation for Black tourists, please research “Bay Shore Beach,”) it’s NASA presence and its Historically Black College and University (HBCU), Hampton University. Here are just a few places for visitors to check out on their next trip to Coastal Virginia.

Mango Mangeaux is a treasure in the Hampton Roads area. Although it doesn’t have the antiquity of many of the older establishments here, I’m not sure how we got along before their amazing food. Founded by Tanecia Willis and Nzinga Teule-Hekima, two entrepreneurs that were featured on the hit show Shark Tank, this Black-owned enterprise has taken southern Virginia by storm. Their business began as a mango preserve company and has expanded to a restaurant, hotel, nail salon and more. Their cuisine offers the best-of-the-best in southern fare ranging from creole to neosoul dishes. If you’re ever in town, just ask for the “Mango Ladies.” And, keep in mind that their mango preserves make great gifts yearound.

While you can find great food at Mango Mangeaux, if you’re a seafood lover, you’d be glad to know that the City of Hampton was once nicknamed “Crabtown.” Hampton is the ideal place for crabbing and eating the delicious crustacean at many different locations throughout the area. Hampton is known for having great crabcakes at its many seafood restaurants.

Hampton University the “Home by the Sea”

Founded in 1868, Hampton Normal and Agricultural Institute was a beacon for previously enslaved people in the area. Hampton Normal and Agricultural Institute was also a “normal” school for Native Americans from the West. Now, Hampton University has a rich, longstanding history in the community. This “Home by the Sea” has grown tremendously since the 1980s when its current president Dr. WIlliam Harvey began his tenure. Visitors can visit the Hampton University Museum. This epicenter of cultural and historical artifacts and documents is the oldest museum of the African Diaspora in the United States. It also happens to be the oldest museum in the state. Additionally, visitors can view the Emancipation Oak, located on the campus. The tree was the site of the first reading of the Emancipation Proclamation in the South. The proclamation was read by African-American schoolteacher Mary Peake in 1863. The beautiful campus is one of only several waterfront HBCUs in the country.

Southeastern Virginia, specifically Hampton, is also one of the locations where NASA pioneers including Catherine Johnson, Christine Darden, Dorothy Vaughn and other African American mathematicians have called home. These women served as the brain behind many important NASA missions and tremendously impacted the nation’s “space race.” If you’re ever in town, you can visit the Hampton History Museum to find out more facts about these “human computers.”

Not far from the Hampton Roads Metro is Southampton County, Virginia – the birthplace of Nat Turner and the site of his infamous insurrection. His actions were one of the most successful slave rebellions in the nation. If you want to get a taste of this history, take a step back in time by traveling to the land where this event occurred. Book publisher and author H. Khalif Khalifah runs a library and community center on the land.

I was fortunate enough to “run loose” in Hampton Roads, my own little beachy, southern corner of the world. I grew up, learned life lessons, went off to college and started my professional career here. This coastal area makes for a great place to vacation, but Hampton Roads, Virginia is also an area full of history, culture and fun that everyone should experience. If you’re ever traveling through the state, be sure to check out all that this metropolitan area offers to residents and visitors alike.

Mahogany Waldon is a Hampton, Virginia native. Mahogany is a graduate of Norfolk State University and holds a master’s degree from the University of Southern California. She is a member of Alpha Kappa Alpha Sorority, Inc. When she isn’t working in the field of communications, she enjoys going to the beach, hiking and exploring the state of Virginia and writing. She also loves a good journal to make endless to-do lists and interior design.