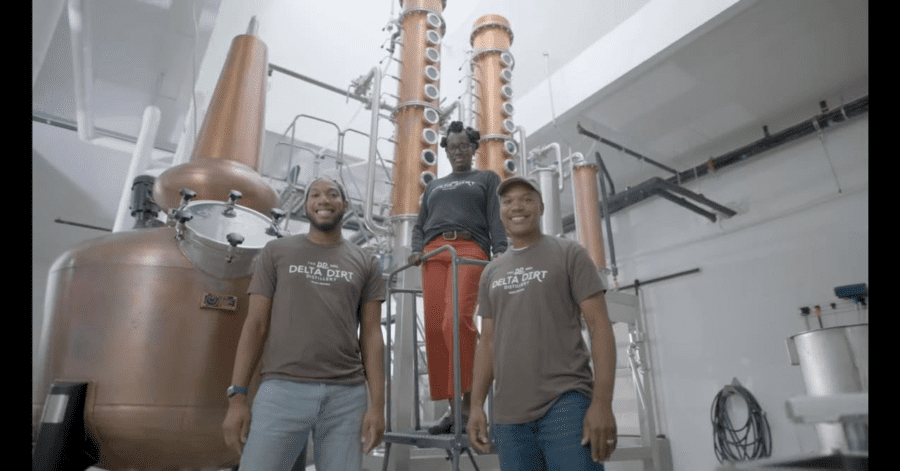 Delta Dirt Distillery’s tagline reads, “Raising spirits in the Delta,” which can mean anything from elevating morale and changing hearts to what Donna and Harvey Williams are doing as the owners of the nation’s only African American-owned farm distillery. They are continuing a work begun by ancestors who used business savvy and agricultural acumen to take care of their families and develop their community.

The original plan was to create “a destination place for” Helena-West Helena. In less than a year, that’s a goal achieved for the Williamses, who grew up in nearby Lee County. People from near and far have traveled to see and experience the couple’s distillery and tasting room located in Old Helena, a historic district in downtown Helena.

What exactly are they tasting? A family-owned recipe for 86-proof sweet potato vodka. The number 86 is significant to them. It is the year the couple graduated from high school as well as the number of acres of land purchased by Harvey’s grandfather. The sweet potatoes grow on that land, and come directly from a family-owned farm in Phillips County, Arkansas, and then taken to their distillery some 30 miles away, where on the weekends their tasting room guests can receive a sip-and-see tour of the facility.

Tasting room customers can look through the window directly into the distillery.

In 2017, Harvey returned to the Arkansas Delta, which is part of the Mississippi Delta region. It’s a place historian Willard B. Gatewood, Jr. called “The Deepest of the Deep South.” It is a region just as well-known for its crops (cotton, soybeans and rice) as it is known for the blues. He simply wanted to return home, and Donna would join him there full-time in 2020. The name Delta Dirt Distillery pays homage to the wealth of the soil.

Harvey’s great-grandfather share-cropped the land that grows the sweet potatoes for the vodka. His grandfather bought 86 acres of that land in a risky, epic way. He used money he made as a moonshiner along with savings to outwit the landowner, who wasn’t expecting him to have the money. Until his recent passing, Harvey’s father worked the farm, and now he and his brothers run it and the distillery is a customer.

Donna and Harvey’s two adult sons have relocated to Helena-West Helena to assist in the operation of Delta Dirt Distillery. One son is the master distiller while the other son assists in the day-to-day business operations of the facility. The couple’s daughter is in the U.S. Navy and joins her family as often as possible.

By April 1, the distillery’s first anniversary, the Williamses hope to add a 92-proof gin to their spirits catalog. Donna says, “The gin will be blended by us but bottled at another facility.”

Next month, they will also be working towards aging their bourbon whiskey recipe.

Until then, their Sweet Blend Vodka is increasing its stockists. It is now available in Costco, Little Rock and at any number of vendors in the state of Arkansas. (The distillery is not allowed to ship out-of-state to consumers.)

As a part of their goal to raise the spirit in the Delta, the Williamses have committed one percent of their profits to community initiatives and they use Delta vendors to supply things such as the appetizers and food sometimes served in the tasting room. In the past, they sourced food from Dee’s BBQ & Catfish and the legendary Jones Bar-B-Que Diner.

But if you’re in for a road trip, then stop by Delta Dirt Distillery’s tasting room at 430 Cherry Street. You can have a craft Sweet Blend cocktail as well as meet some of the many people who stop by to sip-and-see. It’s open Friday, Saturday and Sunday, 4 PM – 8 PM.

If it just so happens that you will be attending the Mississippi Delta Blues and Heritage Festival in Greenville MS, then you have an open invitation to visit the Williamses and Delta Dirt. As you drive you’re liable to look up and see one of their billboards. When asked how she felt after seeing one for the first time, Donna says, “I wonder what people are going to take from that?”

We think they’ll take away something special.