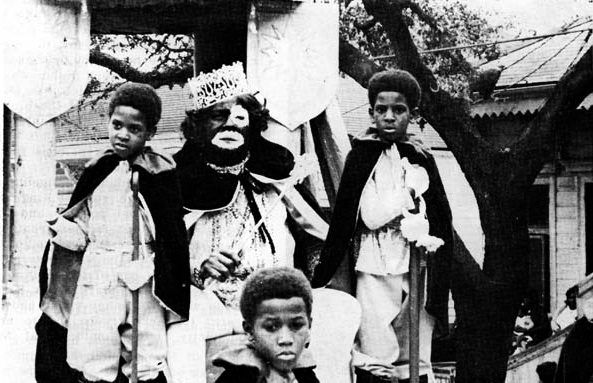 In New Orleans, the Zulu Ball and Mardi Gras Indians are a must see! But, where did these elements of Black Mardi Gras come from and what do they mean? When most people think of Zulu culture, they think of the tribe that is native to South Africa. But, in New Orleans, Zulu is actually a Black social club that hosts an annual ball and events during Mardi Gras. The Zulu Social Aid and Pleasure Club is the most recognizable Black, Mardi Gras carnival organization or krewe. This krewe is over 100 years old.

Founded in 1909, the Zulu krewe was created due to the carnival parades in the city being segregated. Inspired by a play about warriors in a Zulu village, in 1910 the Zulus appeared in their first carnival parade. The krewe uses balls, parties and social events to raise money for African Americans suffering financial hardships. One of their most well-known events is the Zulu Coronation Ball, known to locals as the Zulu Ball, which is held the Friday night before Mardi gras (Fat Tuesday). The ball is a black-tie, formal event and honors the coronation of the king and queen.

The Mardi Gras Indians are composed of African Americans in New Orleans. These individuals wear costumes that honor Native American and African ancestry in the city. The Indians are also a part of the secret krewes that parade during Mardi Gras. While most krewes have a queen, king, dukes, knights and captains, Mardi Gras Indian krewes have a Big Chief. The spectacular aspect of these particular krewes are the suits or costumes that they wear, which are usually the wearers take on Native American regalia. Many suits are colorful and display folk art and cultural symbols.

During Mobile’s Mardi Gras, MAMGA members ride in the MAMMOTH parade in floats, host cultural events, have a coronation ball called the Grand Marshals’ Ball and host a Royal Luncheon.

Although the festivities and fun are important to this social club, members of MAMGA also give back to the community through community service initiatives including mentoring local Mobile youth. MAMGA celebrates 83 years of excellence and service in the Gulf Coast this year.

Founded in 1990, Krewe of African Kings is an all Black, Pensacola krewe with limited membership. This club is one of the oldest mardi gras organizations in the city. While Mardi Gras Indiansin NOLA wear costumes that honor Native American regalia and culture, the Krewe of African Kings wear costumes that honor African royalty like the Ancient Egyptians.

Membership is limited to no more than 20 people to keep its focus on fellowship and festivity in the Pensacola community. Local leaders come together to “let down their crown” or celebrate culture and brotherhood in familiar settings. This close knit krewe also hosts their own coronation ball and members choose an African king that they will honor. This krewe also has a sister organization called the Krewe of African Queens.

Although younger than some of the krewes in surrounding areas like Mobile and New Orleans, the African Kings and Queens give back to the community in many of the same ways through supporting education and the youth.