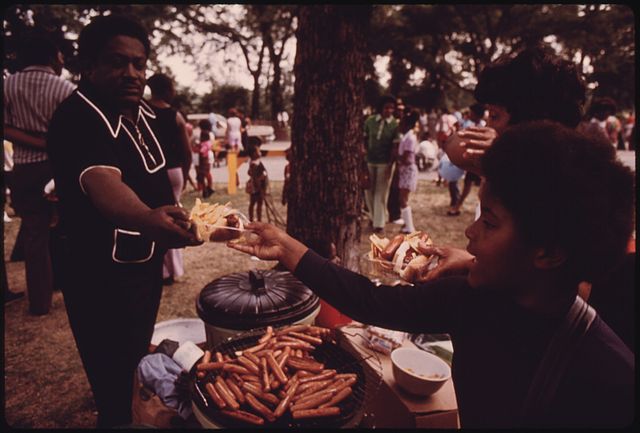 BBQ is a Southern tradition! From the adding of BBQ flavors to many cookout dishes to social gatherings centered around BBQ and the eating of grilled meat, BBQ is a popular type of cuisine and past-time in the South.

An older Black Southern Belle from Memphis, Tennessee, Desiree Robinson, is the co-founder and pitmaster of Cozy Corner. As one of the most popular restaurants in Memphis, Tennessee, Desiree Robinson is the one to thank for much of its success. As Robinson continues to age gracefully, her cooking still remains true to Southern flare and is filled with love and passion.

Deborah & Mary Jones of Jones Bar-B-Q in Kansas City, Kansas are two black women who learned about barbecue from their father. As we know, commonly, father daughter duos are unstoppable and in the kitchen, this is where the duo of flavors come together. Understanding BBQ was all about skill for these two women and is the reason many taste buds in Kansas are always satisfied and memories are being made at Jones Bar-B-Q.

Owner and Pitmaster of Helen’s Bar-B-Q, Turner is a Black Southern Belle aware of what the South needs. Since 1996, Helen has been creating ultimate flavors through grilling and cooking. As one of few Black female pit-cooks, we know that she loves what she does because she has created a livelihood in barbecuing. Turner is so confident in her grilling and pleasing flavors so much that she named the entire restaurant in Brownsville, Tennessee after herself.

Allison Collins maintains the legacy of her father Argia B’s Mumbo Sauce. This sauce, which was born in Chicago and loved everywhere, has been taken under the wing of Argia B. Collins daughter. The brand Select Brands, LLC was launched as a family-owned enterprise. Now decades later, his daughter, Allison, serves as the president of Select Brands, LLC.  She works at her dad’s Argia B’s Bar-B-Q restaurants, assists in the plants that continue the flavors of the Argia B’s MUMBO Sauce, and ensures that the family love for BBQ continues.

All of these women in BBQ are grilling, creating tasty sauces, and changing the way in BBQ history. We know that these women have been inspired by other women like Miss Annie Mae Ward of New Zion Church Barbecue and we hope they are are inspiring you to grill out this summer