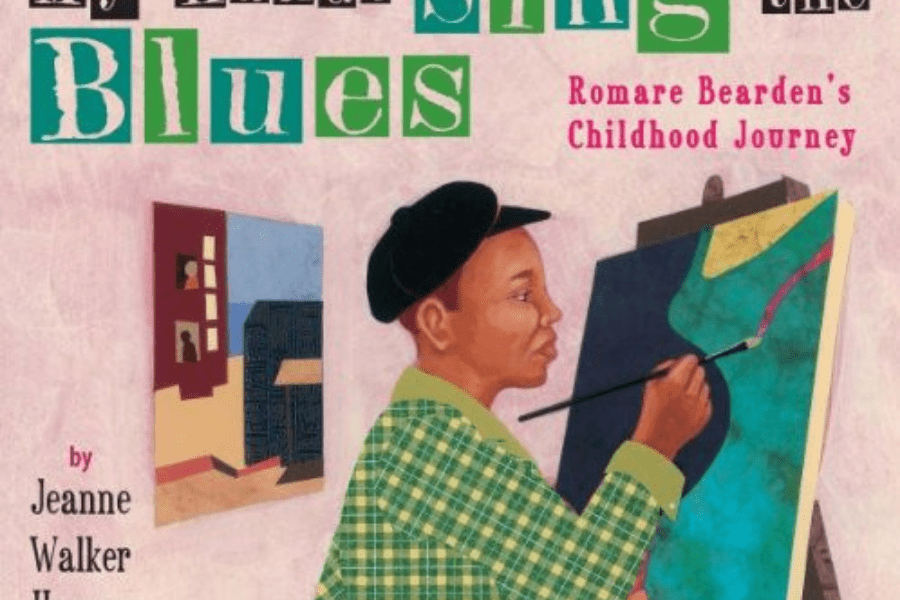 As a book lover and a new mom, I have found myself obsessed with creating a book collection for Jackson’s section of the library. Today, I have curated a list of kids books to help introduce Black Art to your little ones. Check out these Black Art Inspired Books for Kids To Add To Your Library and be sure to share images of your favorite childrens books using the hashtag #blacksouthernbelle

Black Art Inspired Books for Kids To Add To Your Library

As a young boy growing up in North Carolina, Romare Bearden listened to his great-grandmother’s Cherokee stories and heard the whistle of the train that took his people to the North—people who wanted to be free. When Romare boarded that same train, he watched out the window as the world whizzed by. Later he captured those scenes in a famous painting, Watching the Good Trains Go By. Using that painting as inspiration and creating a text influenced by the jazz that Bearden loved, Jeanne Walker Harvey describes the patchwork of daily southern life that Romare saw out the train’s window and the story of his arrival in shimmering New York City. Artists and critics today praise Bearden’s collages for their visual metaphors honoring his past, African American culture, and the human experience. Elizabeth Zunon’s illustrations of painted scenes blended with collage are a stirring tribute to a remarkable artist.

My Hands Sing the Blues is the recipient of the 2012 IRA Childrens and Young Adults Book Award-Primary Non-Fiction, as well as the gold winner of a Moonbeam Children’s Book Award in the category of Picture Book-All Ages.

Jake Makes a World follows the creative adventures of the young Jacob Lawrence as he finds inspiration in the vibrant colors and characters of his community in Harlem. From his mother’s apartment, where he is surrounded by brightly colored walls with intricate patterns; to the streets full of familiar and not-so-familiar faces, sounds, rhythms, and smells; to the art studio where he goes each day after school to transform his everyday world on an epic scale, Jake takes readers on an enchanting journey through the bustling sights and sounds of his neighborhood.

Gordon Parks: How the Photographer Captured Black and White America

His white teacher tells her all-black class, You’ll all wind up porters and waiters. What did she know? Gordon Parks is most famous for being the first black director in Hollywood. But before he made movies and wrote books, he was a poor African American looking for work. When he bought a camera, his life changed forever. He taught himself how to take pictures and before long, people noticed. His success as a fashion photographer landed him a job working for the government. In Washington DC, Gordon went looking for a subject, but what he found was segregation. He and others were treated differently because of the color of their skin. Gordon wanted to take a stand against the racism he observed. With his camera in hand, he found a way. Told through lyrical verse and atmospheric art, this is the story of how, with a single photograph, a self-taught artist got America to take notice.

Born to parents who were both former slaves, Florence Mills knew at an early age that she loved to sing, and that her sweet, bird-like voice, resonated with those who heard her. Performing catapulted her all the way to the stages of 1920s Broadway where she inspired everyone from songwriters to playwrights. Yet with all her success, she knew firsthand how prejudice shaped her world and the world of those around her. As a result, Florence chose to support and promote works by her fellow black performers while heralding a call for their civil rights. Featuring a moving text and colorful illustrations, Harlem’s Little Blackbird is a timeless story about justice, equality, and the importance of following one’s heart and dreams.