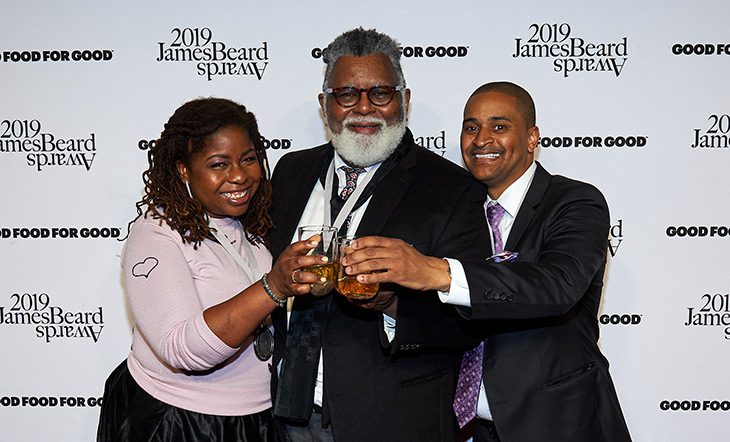 They are called the “Oscars” of the culinary industry, and this year’s series of James Beard Foundation Awards programming were filled with pageantry and glamour, including a red carpet event. Unlike last year, there were not as many black winners, but the wins were every bit as exciting and significant with more firsts.

On Friday, April 26, the JBFA Media Awards took place in New York City and hosted by Tyra Banks. The winner of the Book Award in the American Cooking category was Between Harlem and Heaven: Afro-Asian-American Cooking for Big Nights, Weeknights, and Every Day by JJ Johnson and Alexander Smalls with Veronica Chambers (Flatiron Books). Chef Marcus Samuelsson won a Broadcast Media Award for Outstanding Personality for his PBS series, No Passport Required. And author, culinary historian Jessica B. Harris was inducted into the JBFA Cookbook Hall of Fame, following Edna Lewis’ induction in 2003.

JBFA’s big night was on Monday, May 6 in Chicago. Live-streamed via the Beard Foundation’s site and on Twitter, the awards show was hosted by ABC’s Modern Family star Jesse Tyler Ferguson. Ferguson was entertaining and unapologetically a fan of the culinary superstars in the room. While a few of his jokes fell flat on the audience, he managed to keep the awards show flowing and lively until its very end.

The first winner of the evening was Kwame Onwuachi who was named Rising Star Chef. Onwuachi is the executive chef of Kith and Kin in Washington, DC, and a recent author (Notes from a Young Black Chef: A Memoir). Those are just a few of his accomplishments as a chef under the age of 30. Onwuachi delivered a heartfelt acceptance speech crediting his chef-caterer mother for setting an example for him as a child. The first black Rising Star Chef was Marcus Samuelsson in 1999. Onwuachi is the first African American chef to win the honor. Samuelsson was not a U.S. citizen in 1999.

The moment Mashama Bailey’s name was called for Best Chef Southeast the audience erupted in cheers and loud applause. Last year, Bailey was a finalist but Rodney Scott of Rodney Scott’s BBQ in Charleston, SC won the category. In her acceptance speech, Bailey, executive chef, The Grey in Savannah GA called the late Edna Lewis her mentor and credited everyone from her parents to her business partner to her restaurant’s dishwasher for her success. Bailey is the first black woman to win Best Chef Southeast region.

Last but not least, Geeta and Noel Brown’s A&A Bake & Double and Roti Shop in Brooklyn, New York were honored with the America’s Classics award.

The James Beard Foundation Awards began in 1990, and has a young history. The first African American woman to receive a JBFA was the late Vertamae Grosvenor in 1996 for her NPR radio program. The late Patrick Clark was the first African American to win a JBFA of any kind, as well as the first African American to win a JBFA for Best Chef Mid-Atlantic in 1994. The bulk of black winners have received awards in the America’s Classics category. Between 1990 and 2017, the wins were sporadic though important. However, in 2018, black culinarians were a part of a major JBFA shift that awarded 11 out of sixteen of its big awards to women and people of color.  Perhaps in the years to come, JBFA will continue to acknowledge and appreciate the diversity of food and hospitality people who also uphold a colorblind standard of excellence in the industry. To review a full list of 2019 winners, visit the JBF site.