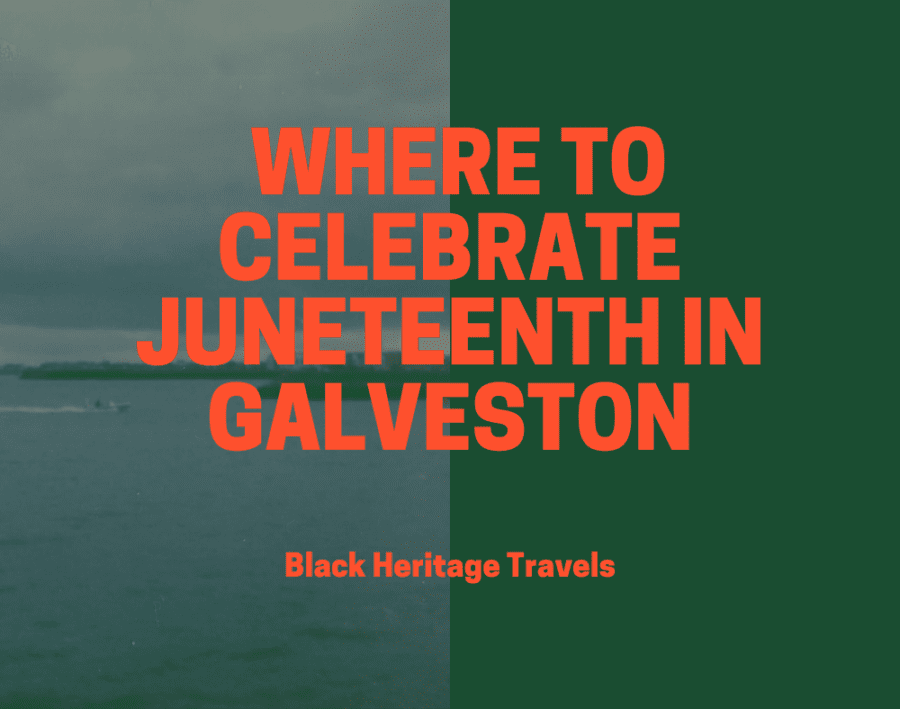 Galveston-born 70s soul singer Esther Phillips sang, “What a difference a day makes, 24 little hours,” which was not a song about the Texas island though still appropriate in describing June 19, 1865. In 2021, we are able to observe Juneteenth anywhere in the world due to the events of the day. But what if you decide to observe the holiday right in Galveston? Here are some sites to visit, things to do, and a few facts to make your trip there enjoyable and purposeful.

Galveston is an island city and port on the Southeast Texas Gulf Coast. It is the county seat of Galveston County. Galveston is off of the Gulf of Mexico. About 18% of the island’s population is African American with a few descendants remaining from that fateful day on Saturday, June 19, 1865, when General Order No. 3 was read, proclaiming freedom from slavery in Texas.

One of the first things recommended while visiting Galveston is to visit all of the locations pertinent to the freeing of the city’s enslaved Africans.The reading of General Order No. 3 took place in numerous locations on the island.

First things first: The Juneteenth Parade takes place on Saturday, June 19, 1 PM. The route begins at 26th and Ball and ends at 41st and Ball. The picnic will follow at Wright Cuney Park.

The Osterman Building, 2201 Strand Street is the now demolished site of the Union Army’s headquarters in Galveston, and where General Granger first read General Order No. 3. A historical marker is on the spot now.

Ashton Villa, 2328 Broadway Avenue J, is still standing as the restored Confederate headquarters turned Federal headquarters that was at one time the home of James Moreau Brown, a banker and merchant before the Civil War. A 9-foot tall bronze statue of former State Rep. Al Edwards, who was the driving force behind Juneteenth becoming a state holiday, was erected in 2005 on the grounds of Ashton Villa. Lore has it that the General Order was read at this site though no evidence can be found to support that often repeated belief.

United States Post Office and Customs House, 1918 Postoffice Street, is possibly the second site of the reading of General Order No. 3.

Reedy Chapel African Methodist Episcopal Church (formerly known as the Negro Church on Broadway), 2013 Broadway Avenue J, is the third location identified as a site that General Order No. 3 was read. Founded in 1848, the church is on land given by white Galveston slaveholders as a place of worship for enslaved people. It is also the location for one of the city’s annual Juneteenth events.

Middle Passage Historical Marker at Texas Seaport Port Museum at Pier 22, a site where Africans are said to have entered Galveston.

Jack Johnson Park, The Old Central Cultural Center, 2627 Avenue M, is the site of the first Black high school in Texas, and an annual day of Juneteenth events that includes a festival in the park named after boxing legend Jack Johnson.

A recent attraction related to Juneteenth is the “Absolute Equality” wall mural by artist Reginald C. Adams and his team of artists. It is located at 22nd and Strand.

If you need a Juneteenth tee shirt, then visit Lady Brown’s Boutique at 2501 Market Street.

One of the most fascinating places is The Settlement or Bell House in Texas City (Galveston County), the remnant of a formerly all-Black community that was once home to the island’s Black cowboys, some farmers and their families. The Settlement thrived from the late 1800s to the 1960s after integration enabled people to move anywhere they wanted. Call ahead for tour hours.

Galveston is approximately 211 miles worth of history and beauty. The Galveston Trolley is a great way to see a few landmarks and enjoy the city without the trouble of driving. The cost is one dollar for adults and there are two routes: Seawall Blvd. and Downtown. Or you can rent a car, drive around listening to Galveston natives Barry White and Esther Phillips on the stereo, and be present as you take in the environment. It is an ideal Juneteenth vacation as a family, a couple or with your girls.