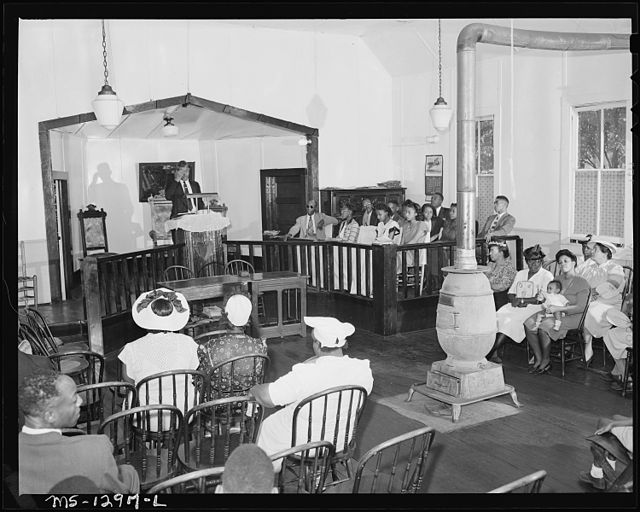 We know the food traditions and even have a few treasured recipes to bring in the New Year. But sometimes it’s the memories and family traditions that linger and inspire even more. These wonderful Black Southern Belles (and Belle affiliates) share some of their Watch Night memories and New Year’s Eve traditions with us. Seven is the number of completion, so these reflections are a great way to complete the old year.

My most memorable Watch Night service taught me the history of Freedom’s Eve. The African Methodist Episcopal churches in our county, of which I attended one, held a joint service one year. The service included a play. The production recreated the evening of December 31, 1862, on a southern plantation. The characters included enslaved adults and children. There was also an overseer and a Black preacher. There was singing, poetry recitation, and prayers. The show included liturgical dance and mime. Tall posts were placed in the four corners of the room, where enslaved men squatted in wait. They were the watchmen. At midnight, a proclamation was read by the overseer. The men on the post blew trumpets, jumped down, and shed their worn, tattered clothing, for shiny new ones. Confetti filled the night sky, music filled the air, and thunderous dancing began. I was twelve at the time. The celebration of Freedom’s Eve became indelibly etched into my memory, and I’ve forever held it close to my heart.

I lived with my grandparents in Virginia; however, during the holidays, my sister, best friend and I would visit my aunt and uncle in Maryland. As children, our New Year’s Eve festivities consisted of being at home while the adults would attend some New Year’s Eve gatherings. We would stay up and watch Dick Clark on television. It wasn’t until I was a teenager that I went out for New Year’s Eve. My first time going out on New Year’s Eve was to a party with my dad and my uncles.

When I think of celebrating New Year’s Eve as a kid, I’m reminded of resolutions, new beginnings, and video countdowns. I’m also reminded of pizza. And not just any pizza. But a kitchen sink whopper of a pie from Rico’s called The Works. If I try hard enough, I can still taste the combination of briny green olives and slightly acidic tomato sauce. Dressed in our pajamas, my sister, brother, and I would huddle around the kitchen table – likely with our six-day-old dolls and gadgets in tow – gleefully gobbling down the squares. It was the star of a junk food feast arranged by my mother, who made sure we had our stash of snacks and drinks before she and my stepfather left us with the babysitter. I participated in this ritual until I left for college and began spending New Year’s Eve with friends.

My family is Creole and Catholic. New Year’s Eve was spent attending mass, then returning home to cook for New Year’s Day. We had and have a woman-centered tradition of gathering in the kitchen to make gumbo and desserts, while the men sleep or do something else. It is special, because it’s one of the occasions we gather from all points – Mobile, AL, NOLA, Florida and beyond. The joy of being with elders who dispense wisdom, family stories and laughter freely and lovingly is what I cherish about New Year’s Eve then and now.

My Watch Night memories are filled with black church—singing and praying, preaching and testimonies. When I was growing up, our family worshiped at a large United Methodist Church in New Orleans. The service was spirit-filled, while reflective. Songs we sang on Watch Night were mostly hymns with some old-time gospel songs sung by the choir. Folks would stand and share about how God had blessed them through the old year and the pastor would preach or one of the members would bring a meditation. One year, when I was in my mid-20s, our pastor asked me to speak. My meditation was titled “A New Year’s ReVolution” and I talked about how revolutionary a New Year’s resolution to follow Christ truly could be.

In the early years of my marriage, my husband was the Minister of Music at a large Baptist church in one of Louisiana’s rural River Parishes. Worship services there were generally livelier, with much more clapping and vocal praise and shouting. I loved the pageantry of the Watch Night services: the “knee-bowed and body-bent” prayers of the deacons; the “Guide Me, O Thou Great Jehovah” lined-out devotional hymns; the “my determination” and “pray for me, saints, as I pray for you” testimonies of the members; and especially the 11:59 pm “don’t want this year to end and me a sinner” conversions. I especially loved those!

Growing up in Maywood a western suburb of Chicago, we had a fairly simple lifestyle especially on New Year’s Eve. We were at home with the TV on watching Dick Clark and playing games. Pokeno or card games (spades, gin rummy, tunk…) board games (Trouble, Sorry, Life…).

The holidays were the only time the “good” wine glasses were used and we children were given a glass of Morgan David. We thought we were doing something special drinking wine at midnight from mom’s beloved gem colored wine glasses!

I’ve only attended a handful of Watch Night services, so the memories are a bit vague. There would be lots of music, a sermon, and it would end at 11 p.m., so people could go to their parties or continue celebrating at home. However, one of my most memorable New Year’s Eve experiences involved my great-uncle and aunt and parties at their house. I was always the youngest one there, by default I was the go-get-it-girl for a bunch of wonderful, raucous elders who were my uncle and aunt’s lifelong friends, sorority sisters, church members and neighbors. They played great music, turned on Dick Clark at midnight to watch the ball drop, and after that, they reveled with storytelling and dancing. Until he turned 90, my uncle performed his annual New Year’s Eve trick of doing a headstand, and holding it. My aunt was the consummate hostess from East Texas, so we had ribs and chitlins, fried chicken, and there was always a roast. I think my favorite part of these celebrations was feeling loved and needed, and even adored by them and their friends. And my next favorite part was taking home tons of leftover food, so I could begin the new year without having to cook.