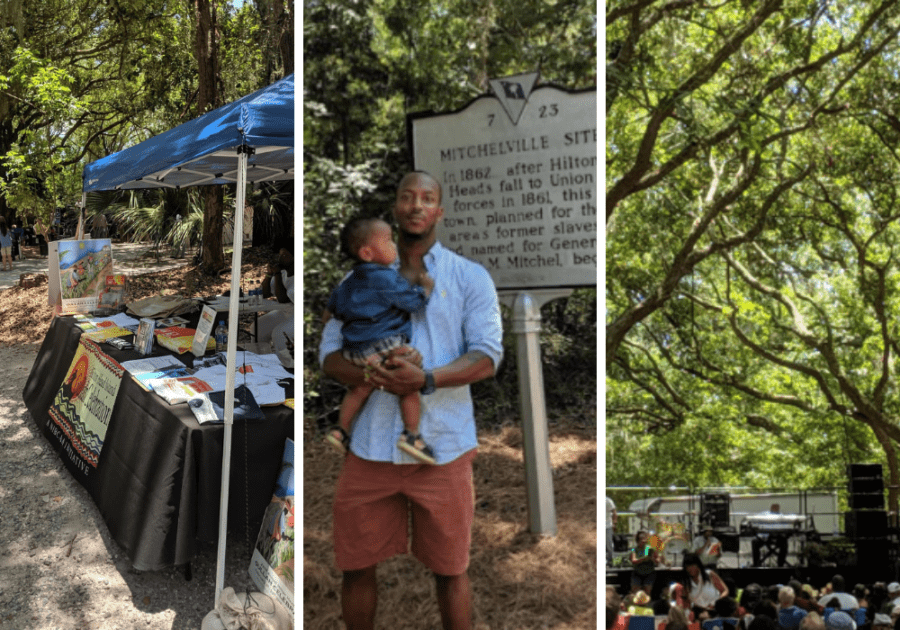 Mitchelville, located on Hilton Head Island, is the first historically Black town established during the Civil War for “contraband” or freedom-seekers who sought refuge with the Union army and navy stationed on the island. June 14-18, the Historic Mitchelville Freedom Park (HMFP) will present Juneteenth: We The People, Joe McGill of The Slave Dwelling Project hosting the Camp Experience, including over 30 art, craft, and food vendors in the park on Saturday, June 18.

Mitchelville was a part of the Port Royal Experiment, enabling freedom-seekers to live independent of white governance to build a community that was economically self-sustaining. In April 1862, a military order was issued freeing the blacks on the Sea Islands but it was rescinded by Lincoln shortly thereafter: President Lincoln developed his own plan of emancipation – the Emancipation Proclamation – officially making the “contraband of war slaves” freedmen on January 1, 1863. By September 1862, the former site of “refugee” barracks was named Mitchelville after Union Army Major General Ormsby Mitchel, who sanctioned the village near the Drayton Hall plantation. Mitchelville as a community survived a number of obstacles, but a major hurricane in 1893 devastated the town. Visit exploremitchelville.org to learn more about the history and HMFP.

Beginning on Tuesday, June 14, HMFP in conjunction with the Blk Freedom Collective, will present “We The People,” a documentary that focuses on the preamble of the U.S. Constitution through the eyes of historic museums and anthropologists from across the country. It is a free virtual event that can be streamed from the blkfreedom.org site.

On Thursday, June 16 The Slave Dwelling Project comes to Historic Mitchelville Freedom Park. Joseph McGill, Jr., founder and executive director of The Slave Dwelling Project, will be hosting a unique and “transformative” camping experience in HMFP that explores the lives and lifestyles of the people of Historic Mitchelville. Space is limited but the event will be live-streamed on Facebook.

The anchor event takes place on Saturday, June 18 with the annual in-park celebration showcasing the food and music customs of the people of Mitchelville with special performances by the legendary Voices of El Shaddai, historical re-enactment from a local favorite Cora Miller, a robust kid-zone including video games and make-and-take craft stations. The featured entertainment will be the renowned Infinity Band from Atlanta. Chairs are encouraged, but no coolers will be allowed in the park.

Juneteenth: We The People, Joe McGill of The Slave Dwelling Project hosting the Camp Experience takes place June 14-18, 2022. The Historic Mitchelville Freedom Park is located at 229 Beach City Road, Hilton Head Island. Tickets are $20 for adults and $5 for youth 6-12 years old. All tickets and event details are available at exploremitchelville.org, or phone 843-255-7301 for more information. Tours of Mitchelville are both self-guided and by appointment. And you’ll want a great place to stay during the festivities. We suggest the Westin Resort, Sea Pines Resort, or the  Palmetto Dunes Resort.

Experience the heritage and history of Juneteenth with your family this year at Historic Mitchelville Freedom Park on Hilton Head Island.