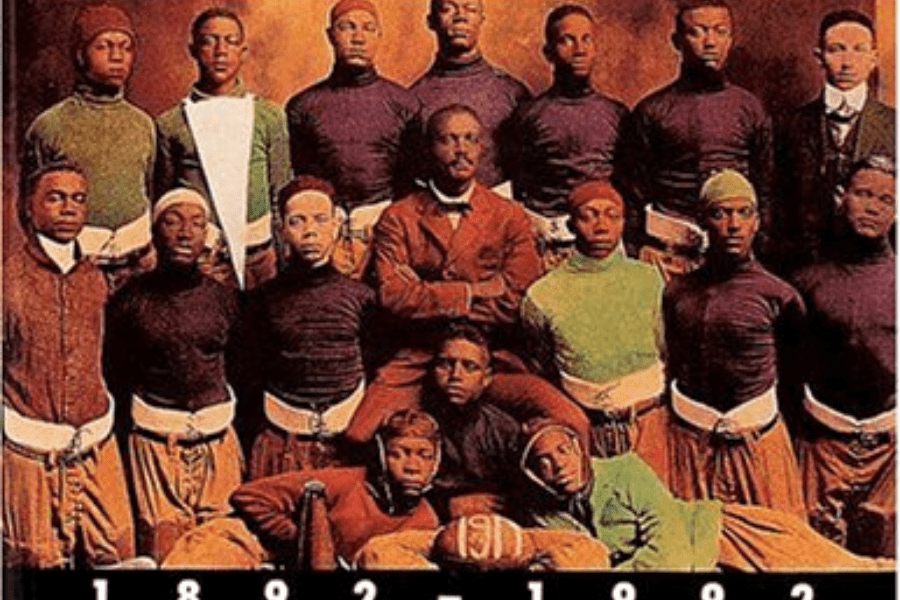 Football season is coming to an end but that doesn’t mean you can’t enjoy it in other ways. As an HBCU grad, I decided to curate a list of HBCU football books to add to your coffee table. So many professional football legends come from HBCUs and not too many years ago they were the only options for black athletes and we are honored to share this list that showcases this rich football history. Have images of HBCU football that you want to show off? Be sure to tag us on social media and use the hashtag #blacksouthernbelle

HBCU Football Books to Add to Your Library

Football at Historically Black Colleges and Universities in Texas

“In Texas, football is king,” Rob Fink writes, “so it provides a prominent window on Texas culture.” In Football at Historically Black Colleges and Universities in Texas, Fink opens this window to afford readers an engaging view of not only the sport and its impact on African Americans in Texas, but also a better and more nuanced perception of the African American community, its aspirations, and its self-understandings from Reconstruction to the present. This book focuses on crucial themes of civil rights, personal and group identity, racial pride, and socio-cultural empowerment.

Although others have examined specific institutions, time periods, and rivalries in black college football, this book is the first to feature a broad narrative encompassing an entire state. This wide field of play affords the opportunity to explore the motivations and contexts for establishing football teams at historically black colleges and universities; the institutional and community purposes served by athletic programs; and how these efforts changed over time in response to changes in sport, higher education, and society.

Fink traces the rise of the sport at HBCUs in Texas and the ways it came to symbolize and focus the aspirations of the African American community. He chronicles its decline, ironically due in part to the gains of the civil rights movement and the subsequent integration of black athletes into previously white institutions. Finally, he shows how HBCUs in Texas have survived in the twenty-first century by concentrating on balanced athletic budgets and a carefully honed appeal to traditional rivalries and constituencies.

Black college football began during the nadir of African American life after the Civil War. The first game occurred in 1892, a little less than four years before the Supreme Court ruled segregation legal in Plessy v. Ferguson. In spite of Jim Crow segregation, Black colleges produced some of the best football programs in the country. They mentored young men who became teachers, preachers, lawyers, and doctors–not to mention many other professions–and transformed Black communities. But when higher education was integrated, the programs faced existential challenges as predominately white institutions steadily set about recruiting their student athletes and hiring their coaches. Blood, Sweat, and Tears explores the legacy of Black college football, with Florida A&M’s Jake Gaither as its central character, one of the most successful coaches in its history. A paradoxical figure, Gaither led one of the most respected Black college football programs, yet many questioned his loyalties during the height of the civil rights movement.

Among the first broad-based histories of Black college athletics, Derrick E. White’s sweeping story complicates the heroic narrative of integration and grapples with the complexities and contradictions of one of the most important sources of Black pride in the twentieth century.

Breaking the Line: The Season in Black College Football That Transformed the Sport and Changed the Course of Civil Rights

In September 1967, after three years of landmark civil rights laws and three months of devastating urban riots, the football season began at Louisiana’s Grambling College and Florida A&M. The teams were led by two extraordinary coaches, Eddie Robinson and Jake Gaither, and they featured the best quarterbacks ever at each school, James Harris and Ken Riley.

Breaking the Line brings to life the historic saga of the battle for the 1967 black college championship, culminating in a riveting, excruciatingly close contest. Samuel G. Freedman traces the rise of these four leaders and their teammates as they storm through the season. Together they helped compel the segre­gated colleges of the South to integrate their teams and redefined who could play quarterback in the NFL, who could be a head coach, and who could run a franchise as general manager.

In Breaking the Line, Freedman brilliantly tells this suspenseful story of character and talent as he takes us from locker room to state capitol, from embattled campus to packed stadium. He captures a pivotal time in American sport and society, filling a missing and crucial chapter in the movement for civil rights.

In 1892, the men of Biddle University met their counterparts form nearby Livingstone College for a “match game of ball” on a snow-covered field in Salisbury, North Carolina, 23 years after Princeton and Rutgers had inaugurated college football. The Biddle and Livingstone players had no idea they were pioneering the sport for black colleges, yet that’s exactly what they did on December 27 of that year. Biddle took a controversial 4-0 decision and football at black colleges was off and running. This book documents the players, coaches, schools, and other entitles which have participated in this rich athletic history which recently celebrated its centennial.