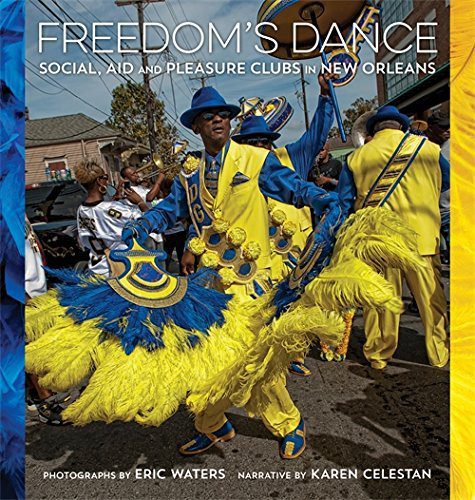 From the Kingdom of Kongo to Congo Square: Kongo Dances and the Origins of the Mardi Gras Indians

From the Kingdom of Kongo to Congo Square: Kongo Dances and the Origins of the Mardi Gras Indians presents a provocatively new interpretation of one of New Orleans s most enigmatic traditions the Mardi Gras Indians. By interpreting the tradition in an Atlantic context, Dewulf traces the black Indians back to the ancient Kingdom of Kongo and its war dance known as sangamento. Enslaved Kongolese brought the rhythm, dancing moves, and feathered headwear of sangamentos to the Americas in performances that came to be known as Kongo dances.

By comparing Kongo dances on the African island of São Tomé with those in Latin America, the Caribbean, and Louisiana, Dewulf demonstrates that the dances in New Orleans s Congo Square were part of a much broader Kongolese performance tradition. He links that to Afro-Catholic mutual-aid societies that honored their elected community leaders or kings with Kongo dances. While the public rituals of these brotherhoods originally thrived in the context of Catholic procession culture around Epiphany and Corpus Christi, they transitioned to as a result of growing orthodoxy within the Church. Dewulf s groundbreaking research suggests a much greater impact of Kongolese traditions and of popular Catholicism on the development of African American cultural heritage and identity. His conclusions force us to radically rethink the traditional narrative on the Mardi Gras Indians, the kings of Zulu, and the origins of black participation in Mardi Gras celebrations.

The ‘Baby Dolls’: Breaking the Race and Gender Barriers of the New Orleans Mardi Gras Tradition (Eisenhower Center Studies on War and Peace)

One of the first women’s organizations to “mask” in a Mardi Gras parade, the “Million Dollar Baby Dolls” redefined the New Orleans carnival tradition. Tracing their origins from Storyville brothels and dance halls to their re-emergence in post-Katrina New Orleans, author Kim Vaz uncovers the fascinating history of the “raddy-walking, shake-dancing, cigar-smoking, money-flinging” ladies that strutted their way into a predominantly male establishment.

The Baby Dolls formed around 1912 as an organization for African American women who used their profits from working in New Orleans’s red-light district to compete with other black women in their profession on Mardi Gras. Part of this competition involved the tradition of masking in which carnival groups create a collective identity through costuming. Their baby doll costumes―short satin dresses, stockings with garters, and bonnets―set against their bold and provocative public behavior not only exploited stereotypes but also empowered and made visible an otherwise marginalized demographic of women.

Young D.J. is going to be a page for the queen of Zulu, the oldest African-American parade in the New Orleans Mardi Gras.

In this pivotal book, the captivating and kinetic images of noted photographer Eric Waters are paired with a collection of insightful essays by preeminent authors and cultural leaders to offer the first complete look at the Social, Aid and Pleasure Club (SAPC) parade culture in New Or-leans. Ranging from ideological approaches to the contributions of musicians, development of specific rituals by various clubs, and parade accessories such as elaborately decorated fans and sashes, Freedom’s Dance provides an unparalleled photographic and textual overview of the SAPC Second Line, tracking its origins in African traditions and subsequent development in black New Orleans culture.

Two African-American children participating in the traditional New Orleans Mardi Gras celebration see such sights as the Zulu and Rex parades, enjoying the songs, bright costumes, and gigantic floats. By the author of The Jazz of Our Street.