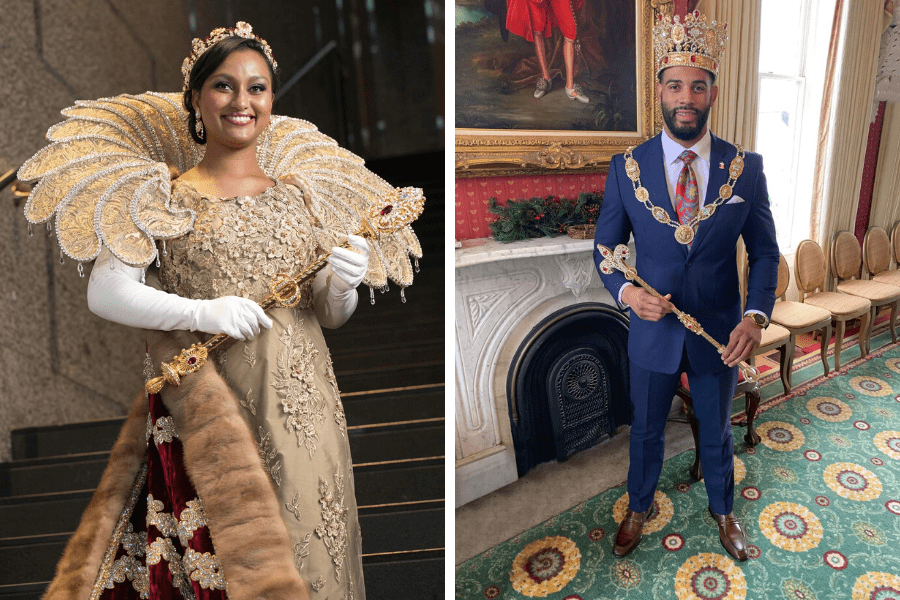 Today we are featuring the 2020 Royal Court of the Mobile Area Mardi Association. The Mobile Area Mardi Gras Association (MAMGA) a 501 (C) non-profit organization (formally the Colored Carnival Association) was incorporated in 1938 under the trusteeship of W. L. Russell, D.D.S, J.T. McKinnis, a local Mortician, Sam Besteda, Jr., a local Tailor and J.A. Franklin, M.D. of which the current 15 Franklin Primary Health Clinics are named.

HIS ROYAL HIGHNESS, QUINTERRIS JACOBIA TOPPINGS is the son of Tiffany Buchanan and the grandson of Pastor Charles Buchanan.   He is an AP Honor alumnus of Mattie T. Blount High School where he graduated number seven in his class.  He was a four-year starting varsity football quarterback, sophomore class president, 2012 graduate of Youth Leadership Mobile, representative for the Drug Education Council, and ambassador to the Mobile County Public School System’s Superintendent’s Advisory Council.  King Toppings was a Beau for the 2013 Jack and Jill Le Beautillion and achieved the distinct honor of being named scholar – athlete for WKRG 5, Reese’s Senior Bowl, 1st and 10 Club, Go Daddy Bowl, Crichton Optimist Club, WJTC 44, Papa John’s Pizza, and the Alabama High School Athletic Association (AHSAA).King Toppings graduated Cum Laude with a Bachelor of Science in Business Administration from Alabama State University (ASU).  He was a Mobile Kappa Leaguer and was initiated into Kappa Alpha Psi Fraternity through the Beta Zeta Chapter.  During his tenure at ASU, he was named starting quarterback on the Hornet football team and selected as an ambassador with the Student Athlete Advisory Council.  He continued his educational pursuits and graduated from Gupton – Jones College of Funeral Services.  His Royal Highness resides in Atlanta, Georgia where he works with Gus Thornhill Funeral Home.  King Toppings attends Showers of Blessings Church of God in Christ.  King Quinterris served as knight to junior King Gerald LaMarcus Archard and Queen Breanna Jordann Walker (MAMGA 2012), king of the Prichard Mardi Gras Association (2013), and 1st knight to His Royal Highness King Elexis 1 King Olabode Oludayo Anise and Her Royal and Most Gracious Majesty Queen Katherine Ashley Smith (MAMGA 2017).  King Toppings now serves as his family’s first MAMGA King.King Toppings’s costume and train were designed and executed by Patricia Halsell – Richardson of Patricia Anns.  His crown, scepter, and satori were designed by Tommy and Tonya Cain of Dynasty Collection.  Quotes:  “Perfection is not attainable, but if we chase perfection we can catch excellence.”- Vince Lombard

Queen Rosemary Elaine Dunning graduated high school from Gaston Day School before completing her undergraduate education at High Point University. She earned a Bachelors of Science in Psychology and a Bachelors of Arts in Spanish. Fluent in Spanish, she studied abroad in Chile during her undergraduate career and maintained active status in Sigma Delta Pi National Spanish Honor Society. Queen Rosemary currently resides in Charlotte, North Carolina where she is pursuing her Masters in Psychology while working with children with autism to achieve optimal autonomy and quality of life through applied behavioral analysis.​Some of her many passions include art, animals, lifelong learning, traveling, and mental health. Throughout her educational career, she earned many Scholastic Awards, including several Gold Keys, in two of her academic strong suites – art and English. The late artist Jim Biggers left a deep and lasting impression on her art process and life perspective as her friend and mentor. She is an accomplished artist with exhibitions of both her artwork and personal memoirs in a wide array of public spaces, commissions, and publications in magazines. Queen Rosemary knew from a young age that exploring new cultures through world travel would be an integral part of her life experience. As an avid traveler, she has visited four of the seven continents and is always looking for her next destination to acquire new knowledge and experiences from which to grow. While home, she fulfills her need for community involvement through voluntarism in local organizations and demographics such as with the homeless population of the Carolinas, Hospice, Guilford County Animal Shelter, Links Inc., and Mission of Mercy. She holds a deep conviction that mental health is the sustenance of life through which all things are made possible. Her belief that most all of life’s outcomes are a function of behavior which is directly shaped by mental health led her to decide that mental health would be the focal point of her reign. Driven by this philosophy, she is beyond thrilled to be able to enact positive change in the world by using her understanding of behavior to help others attain the best versions of themselves and, subsequently, the world around them.​Queen Rosemary Elaine Dunning is the proud daughter of Dr. Richard and Valerie Dunning, both of whom met in MAMGA’s Royal Court of 1988, and older sister to Richard Brown Dunning, III. As the granddaughter of Ms. Juanita Pritchett Barner and Mr. Richard Dunning, Sr. of Mobile and the late Mr. Ruben Watson and Mrs. Rosemary Little Watson of Mobile, Her Majesty has roots deeply grounded within Mobile and her culturally rich society. She belongs to a long familial lineage of shared values with MAMGA starting with participation in the royal court dating as far back as 1949 with her grandmother Rosemary L. Watson as First Lady in Waiting to Queen Verma Powe. Since, her family’s legacy has ranged from chair members to kings and queens including but not limited to:  Queen Winifred Lucy (1975), Winifred Green (1982), Edra Finley (2013), and Cecile Green (2014); King Tommy Agee (1966), William Wyatt (1968) and John Finley, IV (2018); First Lady in Waiting Mary Butler (1946) and Valerie Dunning (1988); Lady Virginia Bara (1953); Knight Wiley Butler (1946), Willis Wright, Jr. (1966), Frederick Watson (1984), Richard Dunning, Jr. (1988), Ruben Watson (1990), and Allen Green (2017); Junior King Joseph Little (2017); Proclamation Bearer Charles Johnson (1993) and Julian Little (2012); Flower Girl Ida Johnson (1960); Goblet Bearer Tracy Yancy (1971), Equerry Walter K. Little, III (1996); and Harold Samuel and Christopher Johnson (1995).​Having previously been in the court of 2018 as Second Lady in Waiting to Queen Tiffani Hall, Queen Rosemary understands what it means to exude leadership and elegance while using this platform as a means to continue tradition and promote community service. She has chosen Patricia Halsell-Richardson of Patricia Anns to design and execute her train.