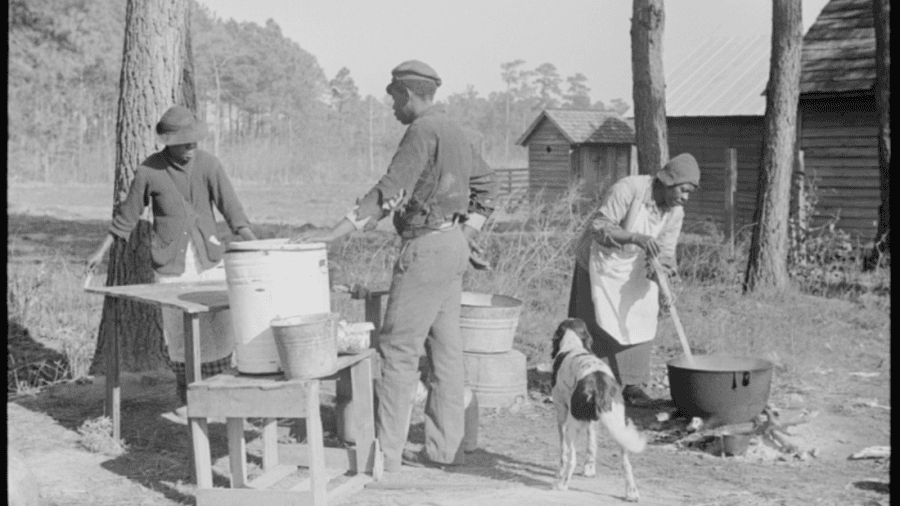 Who said men are the only pitmasters? Generally, most people who feature or write about Southern BBQ focus in on the men. In a USA Today feature, “Female pitmasters are rising to the top of the Southern barbecue world,” author Adrian Miller discusses Marie Jean, a Black woman in the 1840s who purchased her freedom as a pitmaster or pitmistress in Arkansas Post (Arkansas).  Miller told USA Today, “‘The way that barbecue developed, the digging of the trench, chopping down wood, burning that, and then cooking these whole animal carcasses, I could just see why that became associated as men’s work.’”

The following curated list of Black women pitmasters is proof that in all of its forms, barbecuing is not just men’s work. All either hail from the South or inform their BBQ work on their southern roots. Every last one is award-winning.

Black Women in the BBQ Supply Chain: Meet the Mistresses of the Pit

In Los Angeles, Shalamar Lane (My Father’s Barbecue, Carson CA) and Tracy Phillips (Woody’s Bar-B-Que) are carrying on family traditions that traveled from the deepest parts of the South. Lane’s father was from Bessemer, Al., and in My Father’s BBQ, she cooks her meats based on his influence as well as her mother’s Texas influence. Tracy Phillips’s father Woody was from Keatchie, La., a small farming community south of Shreveport. Woody’s Bar-B-Que is a Los Angeles institution.

After an appearance in an episode of Queer Eye, the Jones Sisters of Kansas City’s (Missouri) Jones’s Bar-B-Que have become media darlings. The sister-pitmasters are up to the task and the restaurant started by their father in the 1970s continues to stand, stronger than ever.

Pitmaster Helen Turner is a grand dame of barbecue. The owner of Helen’s Bar B Q in Brownsville, Tn., started her business 25 years ago with the help of family. Her food brings people to Brownsville from all over the world. One of her specialties is barbecued bologna.

Desiree Robinson is another grand dame of barbecue. The Memphis-based owner of Cozy Corner is the first African American woman and first living African American to be inducted into the Barbecue Hall-of-Fame. Desiree opened Cozy Corner in 1977 with her late husband Raymond. She chose to continue operating after his death in 2001. One of her specialties is barbecued Cornish game hen.

Mrs. Gerri Grady co-owns Grady’s BBQ in Dudley, NC with her husband Stephen. Grady’s is over 35 years old and is a highly regarded barbecue restaurant. Stephen Grady comes from a long line of pitmasters, but Gerri who is from Seven Springs, NC is also from a whole hog, ground-dug barbecuing family and can capably assist in pit duties.

While women pitmasters are “rising” to the top of a predominately white, competitive world of barbecue, the role of Black women – who in large part are not a part of that trophied world – is being revealed from beyond the hidden pages of books. And beyond a narrow definition of who can “master” the pit.