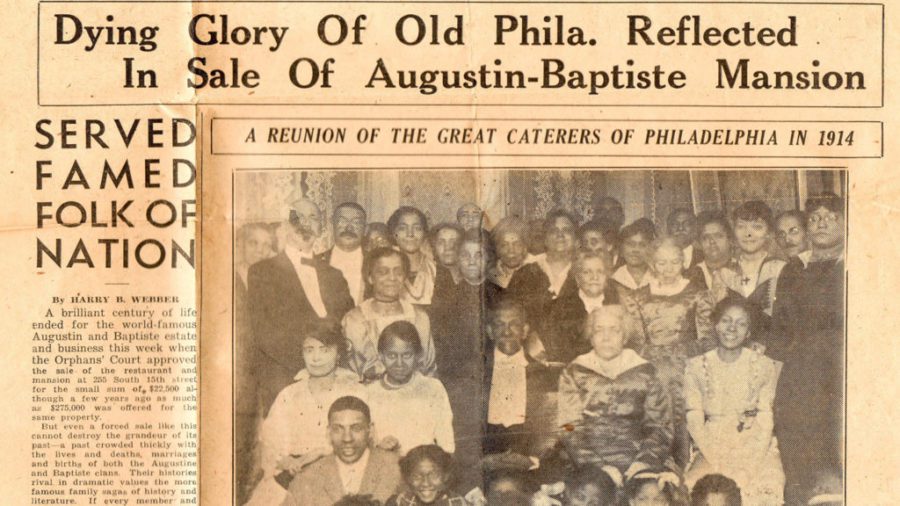 In celebrity chef culture, African American caterers rarely receive the accolades due for contributions to culinary history. The history of catering companies owned by black people is an enterprise story worthy of exploration and celebration. Often, these men and women amassed great wealth while building communities, assisting in the freedom of enslaved Africans by donating cash and resources to the underground railroad and abolitionists, and setting an industry standard that remains today.

Let’s begin in Philadelphia, up North, where catering as a business enterprise was dominated by formerly enslaved Africans as early as the 18th century. Philadelphia was the capital of the newly-formed United States of America, George Washington and other political types conducted business there, and much of that business was social. In 1778, the earliest documented major event catered by a black man was catered by Caesar Cranshell, the occasion was a ball celebrating General William Howe’s return to Britain. Robert Bogle would follow Cranshell. Bogle was a respected restaurateur who was the first person of African descent to open a catering company to serve the city’s white elite. Thomas Dorsey was another prominent caterer. Dorsey was an escaped slave who was born in Maryland and sought asylum in Philadelphia. After Bogle’s death Peter Augustine, a Haitian refugee, would purchase his business. If Bogle created a catering blueprint, then Augustine took it to the next level. He trained wait staff and other crew in the production of food events. Augustine also provided china, tablecloths, tables, chairs, and other catering accoutrement he rented to his clients for their events. Philadelphia was an unofficial center for blacks in catering, yet up and down the Eastern seaboard, black caterers like James LeCount, James Prosser, James Wormley and Jeremiah Bower built substantial fortunes in food service.

According to the Lowcountry Digital Library, “Caterer was also one of the few, and most lucrative, prominent public positions that could be acceptably filled by an African American during slavery. For this reason, a number of American cities featured influential black caterers during the nineteenth century: John Dabney in Richmond, Virginia…Washington, D.C.; Henry Jakes in Baltimore, Maryland…and Lexius Henson in Augusta, Georgia. These men and women had the training and skills to cook for large numbers; manage books to minimize costs; transport china, silver, tables, linen, tents, and foodstuffs; hire reliable wait staff and cooking assistants; contract for entertainment; and speak eloquently at major gatherings.”

Two women birthed an incredible legacy of food service in Charleston. Sally Seymour was an enslaved cook in the kitchen of Thomas Martin, the father of her children. When he released her from service, she started her own restaurant. Trained in the culinary arts by one of Charleston’s two French-trained pastry chefs, Sally, according to Charleston magazine, “also taught numbers of the free black women who would become her rivals: Camilla Johnson, Eliza Dwight, Martha Gilchrist, Cato McCloud, and the Holton sisters. Her greatest disciples were her own children, William and Eliza.” Eliza Seymour Lee would exceed her mother in ambition and enterprise, opening her own restaurant and catering company, and a series of boarding houses in Charleston. Between Sally and Eliza, the following men were mentees and often sought their tutelage and resources to build their own businesses.

Known for his culinary skills and sophistication as a domestic servant, Charleston’s Nat Fuller opened a restaurant that evolved into a gentleman’s clubhouse (Bachelor’s Retreat) for the city’s white elites as well as a catering company. Fuller began his career enslaved with an arrangement sharing profits with his owner, William C. Gatewood. Post-Emancipation, he flourished. In 1865, it is purported that Fuller hosted and catered a feast in Charleston, celebrating the end of the Civil War. The dinner was considered his attempt at reconciliation. A year later, he died, and his assistant, Tom Tully, took over all of his culinary enterprises, including the catering company and a specialty game (exotic fowl and animals) business. Tully would buy Fuller’s catering equipment and hire Fuller’s widow to work as his pastry chef. Ultimately, Tully’s assistant, William Barron, would become a prosperous caterer in the city.

Some caterers worked private duty like Middle Tennessee cookbook author and chef Rufus Estes. He spent the end of his career working for U.S. Steel as a caterer for their VIPs, performing some of the same culinary duties he’d perform as a Pullman chef. Orangeburg, SC’s Abby Fisher is a former slave who penned the second cookbook by a black woman, What Mrs. Fisher Knows About Old Southern Cooking, made a living for herself as a private cook and sometime caterer.

Today’s African American caterers, especially in the South, are as industrious as their foreparents in the business. They cater for the love of food and display the same giftedness at preparing a variety of foods that reflect their region’s heritage. Some sell single dishes or specialty items, and others do it all. Large and small, all are thriving. Here is a short list of caterers who can be found throughout the South.

Willie Jean’s Dish or That


There are few catering companies that are old family-owned businesses left. Churches have a line to the women and men who cook out of their homes and provide food for funerals, weddings, and church functions. Those caterers are important too. However, identifying black southern caterers for an exhaustive list of caterers is difficult, but if you know one, please tell them we said ‘thank you.’